For Digital Women’s Code Camp 2019, I worked with three engineers to create graphics for the game they were designing. The game was designed in Pygame. The game functioned so that a character flying through an environment would have to avoid obstacles as the obstacles moved towards them across the screen. The character could be controlled using a mouse or an infrared sensor that noted how close a players hand was to the sensor and mapped the characters placement on the screen accordingly.

For the purpose of the game, I developed characters, obstacles, and corresponding environments (ie. an alien in space).

I worked to develop and implement consistent illustration styles throughout the game. I used flat design principles to create the illustrations and then expanded on their shapes using sketch lines to create a more hand drawn feel. I worked with the engineers to ensure that all the graphics dimensions were in line with the screen size they were designing the game for. Once the illustrations were solidified, I proceeded to animate both the characters and the obstacles using Adobe Photoshop. The engineers were then able to implement the animations using the image sequences I exported and shared with them. In addition to the illustrations, I also photographed the project and contributed to the final report.

For Hack ISU Fall 2018, I worked with two engineers to build a fully functional pinball machine. I  built the physical machine using foam board, cardboard and hot glue. We collaborated to ensure that the multi-part device met the necessary specifications so they could properly wire and integrate their elements.

I also created artwork that aligned with their chosen theme, the Reagan Administration. By researching the era, we decided on key events during 1980’s that we wanted to visually feature on the machine. These events became the contraptions and decor on the machine. We have cold war bumpers, a judge appointment panel, a PATCO strike see-saw, an invasion of Grenada ramp, and Just Say No to Drugs propaganda.

When the ball would hit the various contraptions on the board, different images would present themselves on the score board. Some of the images were programmed by one of the engineers to appear randomly on the screen resulting in either an increase or decrease in points.

For Hack ISU Spring 2018, I worked with three engineers to create a stand that would display the data collected by their project, a dance rater. A user would move to the beat of music with an accelerometer on their arm, the accelerometer would track their movement and give the user a score. The score would then be displayed using LED’s mounted to the stand.

The portable stand is made of plywood and reinforced balsa wood with a collapsible handle making it convenient to carry. I chose to paint the stand in a 1960’s pop art style to set a funky and fun mood for the dancer. In addition to building the stand, I also worked to design wearable devices that the accelerometers were fastened to. 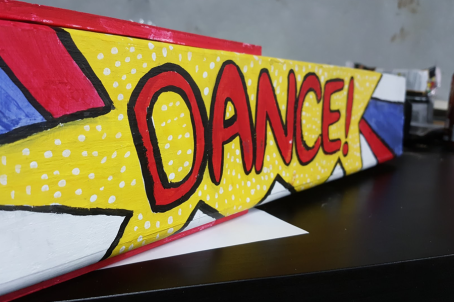 Learn more about these projects on Devpost.